For decades, terrorism has been a reality in many European countries and a continuous threat to a great number of European cities. It seriously threatens the safety, the values of democratic states and the rights and liberties of citizens. Acts of terrorism bring about long-term negative effects for cities and high social costs. Not only from a financial, but also from a psychological point of view in the sense of an increased feeling of insecurity among locals and visitors [1].

Over the years, strategies to protect public space against terrorism have strengthened and evolved, mainly focussing on protecting critical infrastructures. However, terrorist attacks are evolving as well. By adapting to new contexts and opportunities, lately public space has turned into an attractive target for terrorist attacks. To illustrate, the latest terrorist attacks in European cities such as London, Paris, Manchester, Stockholm, Berlin, Brussels, Barcelona…have occurred in public areas. These areas are considered as “soft targets”. This means that crowded public places including the metro, shopping centres, sports stadiums, bars, restaurants, clubs and commercial sidewalks, are easily accessible to the public and an easy target for terrorists to do great harm. These areas called soft targets, are targets because attacking them can aid terrorist organisations to obtain their goals, for instance threatening the safety of the public, the values of democratic states or the rights and liberties of citizens.

In this context, the PRoTECT project aims to strengthen local authorities’ capabilities in public spaces protection by putting in place an overarching concept where tools, technology, training and field demonstrations will lead to situational awareness and improve direct responses to secure public places before, during and after a terrorist threat. This cross sectoral project is an initiative of the Core group of the European Network of Law Enforcement Technology Services (ENLETS).As stated by the European Commission in the Action Plan to support the protection of public spaces, “local and regional authorities are also important stakeholders in the protection of public space”. The EU Commission is thus committed to reinforce the involvement of these stakeholders by promoting dialogue and exchange between national, regional and local authorities and supporting the development of operational projects.

In light of the above, local authorities responsible for the safety and security of their citizens must be aware of the vulnerabilities of their public spaces in order to be able to adopt appropriate measures to prevent and mitigate terrorist attacks and their consequences [2]. This is why, DG HOME has developed the EU Vulnerability Assessment Tool (VAT) [3]. The EU VAT is part of the Commission’s efforts to support local and regional authorities in the protection of urban spaces. The commission continues to improve it by developing macros to have a completer and more useful tool.

As such, one of the project activities is to assess the EU Vulnerability Assessment tool’s (VA) quality by applying the EU VA Tool in five European cities (Malaga, Eindhoven, Larissa, Brasov and Vilnius), aiding these cities in assessing their vulnerabilities against terrorist attacks, and to give the resulting feedback about the use of the EU VA Tool to DG Home. 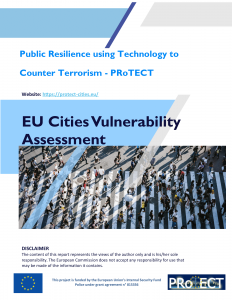 Click here to read the full version of the report.

We use cookies to ensure that we give you the best experience on our website. If you continue to use this site we will assume that you are happy with it.Ok